How healthy were people in Islington between 1858 and today?

The final day focused on the period from 1858 to the present. Public health reform, advances in medical knowledge and better living conditions resulted in vastly improved health for the people of Islington. Of particular importance was the establishment of the National Health Service in 1948 by the post-war Labour government which meant everyone, rich or poor could access medical services for free at the point of need for the first time.

As a starting point for studying this momentous period pupils viewed a government information film produced at the time as a humorous cartoon explaining how the health service would operate and why it would benefit everyone. To access the film click here https://www.youtube.com/watch?v=nOISyKhy474

(The film could be paused at different points, to lead discussion and check pupil understanding). Teachers displayed the first slide of PowerPoint D which shows the factors making people healthy which have been used throughout the week. Discussion was then lead taking suggestions from pupils about how the NHS would help meet people’s needs.

(At this point some of the oral history clips on this website where residents of Islington talk about going to the doctor or hospital before and then after the NHS was set up could be played. Click here to access St John Evangelist Oral evidence of changes in public health in the borough in the twentieth century.

This initial activity on the foundation of the National Health Service was a way of introducing the final card sort covering the whole period from 1858 to the present Click on the link PowerPoint D at the bottom of the page . As on Day Four the card sort was much larger than for the periods 1170 to 1575 and from 1575 to 1780 (for guidance on using it see Document E at the bottom of the page). Again as on previous days the classes agreed on how to extend the living graph to the present, completing the overview from 1170.

Pupils also referred back to the swingometer, discussing which of the three beliefs about who people believed was responsible for public health up to the present. Pupils could also handle;

Teaching prepared pupils for an afternoon visit to Finsbury Health Centre. Slide Sixty Four from PPt D was displayed showing a British propaganda poster from 1942 during the Second World War, featuring Finsbury Health Centre. This was a free health clinic built in in 1938 as a symbol of the rebuilt post-war Britain that British soldiers were currently fighting for (for the purpose of teaching it is important that the location of the health centre should not be revealed at this stage). For a full description of the background to the poster, a copy of which is included in the artefact collection as Artefact Twelve (For full explanations of these artefacts click here – St John Evangelist Artefacts descriptions) 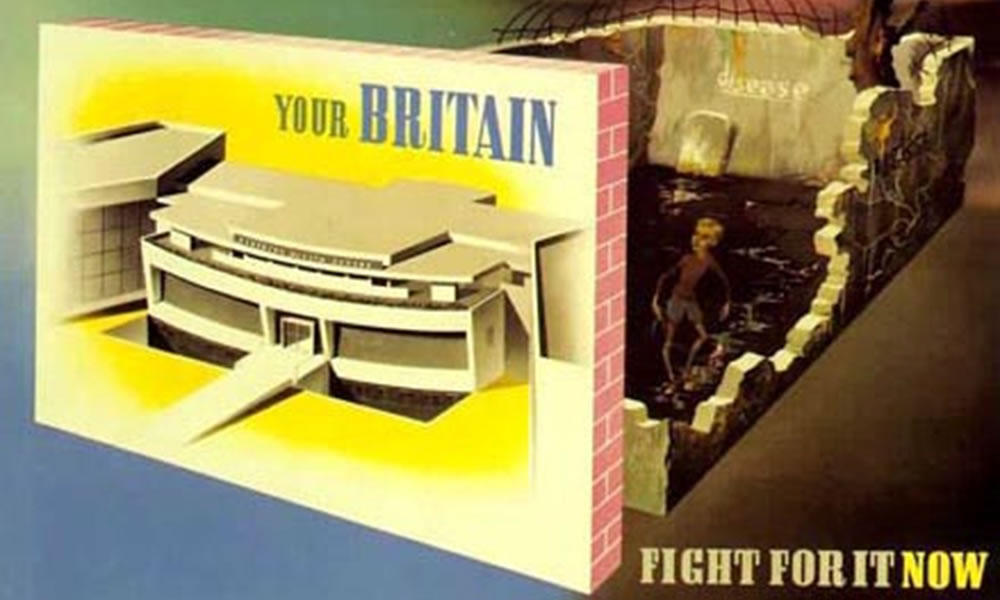 (Discussion in pairs or trios could be encouraged by placing a copy of the poster into a layers of inference frame with a series of questions to be answered by annotating around the images as discussion moves from concrete observation such as What can I see to more abstract questions such as what other questions What else do I need to ask? See Slide Sixty Five of PowerPoint D for an example).

After taking suggestions about the poster from a variety of pupils teachers display the photograph of the architect Berthold Lubetkin from Slide Sixty Six and explain   that he was the designer of the health centre in the poster and that it was built in Finsbury in 1938. 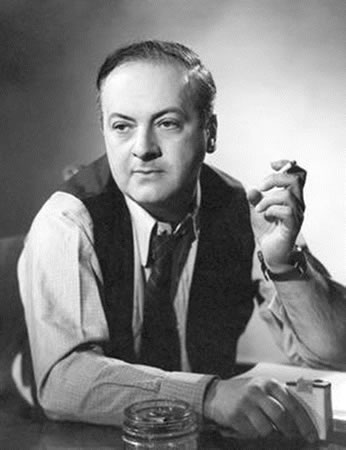 Display Slides Sixty Seven to Seventy Eight showing photographs of the exterior and interior (or distribute copies to pupils) and ask pairs to;

Lead discussion taking suggestions from pairs. Then list the purposes of each interior or display from Slide Seventy Nine) and take suggestions for which photograph matches which heading before revealing the correct headings on Slide Eighty.

In the afternoon, pupils walked to Finsbury Health Centre (another local site which is also of national and international importance in the history of public health). In the late 1930s Finsbury Borough Council was run by left-wing Socialists of the Labour Party. Dr Chuni Lal Kaital, an Indian doctor who headed the Public Health Committee was determined to show how local authorities could improve the lives of ordinary residents through spending public money. The council was inspired by the idea that access to health care should not be governed by whether people could afford it or not. Counsellors wanted to prove that it was practical and realistic for everyone in the locality to be able to visit a doctor and receive necessary medical treatment free of charge. They approached an innovative architectural practice called Tecton to design a state-of-the-art health centre for local people in Pine Street. The plans were carefully drawn up by a talented young Russian exile called Berthold Lubetkin.

(Lubetkin’s designs were cutting edge Modernist architecture of the period, part of the Bauhaus movement originating in Germany which pioneered the use of concrete).

A slum site was cleared and it took three years to build a centre which opened on  21st  October 1938 at a cost of £62,000. Lubetkin declared “Nothing is too good for the people”. 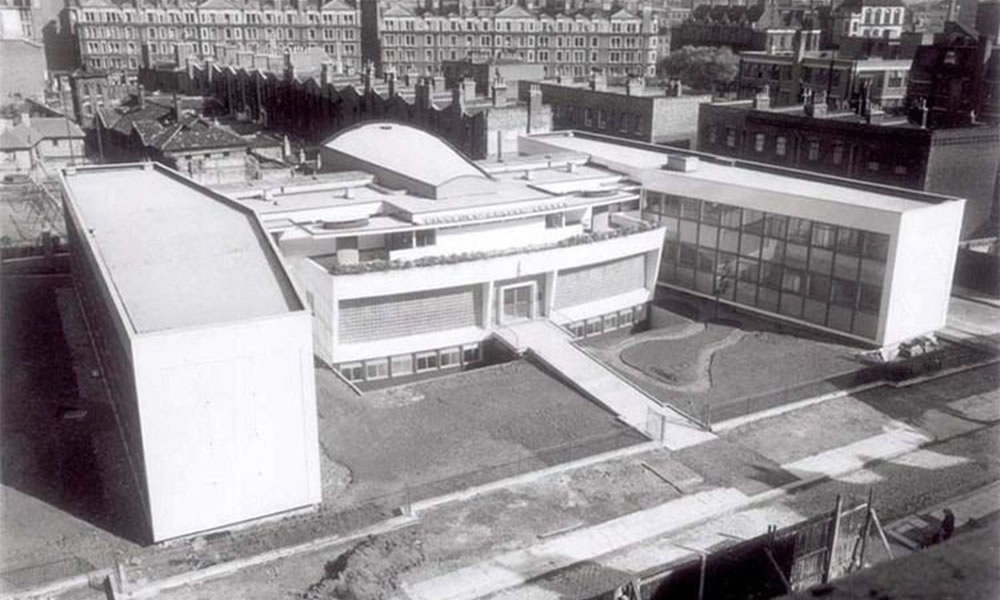 The entrance had bronze doors with a marble surround. The interiors were deliberately light and spacious, featuring colourful murals promoting the benefits of fresh air and exercise. The centre had a series of clinics where local residents could see doctors and dentists and have their eyes and feet checked, all free of charge. Local children were treated with ultraviolet rays for Ricketts, a condition that causes weak bones from lack of sunshine and vitamin C deficiency. There were rooms for x-rays and treatment of tuberculosis. Council sanitary inspectors and health visitors were based at the centre which included accommodation units for those families whose houses were being disinfected. Also rooms were installed in the basement for disinfecting children and a lecture hall was built for public information. For local people, mainly living in slum environments polluted by smog, plagued by fleas and lice and with widespread occurrences of diphtheria, tuberculosis, Ricketts and whooping cough the centre was a revelation. As Rita Pirlo, resident of Highbury put it “In the 1920s it cost 6 d (pence) to see the doctor, most people only saw one, once or twice in their lives.” What was perhaps most remarkable about the health centre was the timing of it’s opening- a year before Europe was plunged into the Second World War and a full 10 years before the post-war Labour government extended free healthcare to all British people through the National Health Service in 1948.

The building is still used as a local surgery today but in the last decade has been threatened with closure. While restoration work has taken place within that period, the building needs an extensive programme to bring it back to the state it was in 1938. Today it is easy to walk past without even noticing it. 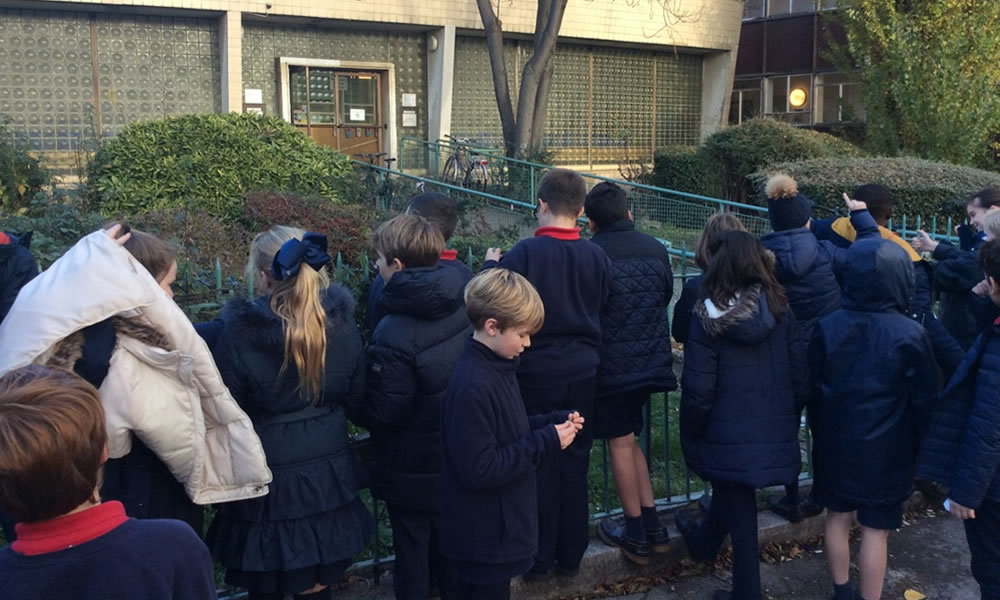 When classes reached the site they were given copies of the photograph showing the exterior of the site when it was first opened from Slide Sixty Seven. Read out the adjectives pupils used to describe the building earlier in class. Then allow a little time for them to suggest what adjectives are suggested by the exterior of the building today. Give out copies of Slides Sixty Eight and Nine showing the reception centre when it first opened. If possible ask at reception for smaller groups of pupils to view the interior of the entrance area (it is not permissible to take photographs inside). Afterwards lead discussion about how the interior has been changed and adjectives that might be used to describe it today.